The subject is Japanese real estate. And the question is: are we buying or selling?

The first thing to know about real estate in Japan is that there isn’t much of it, at least compared to the number of people who live there.

The four main islands of Japan are approximately 1,200 miles long. This is about two-thirds the length of the US Atlantic coast (about 2,000 miles). In area, however, Japan is a bit smaller than Montana.

However, much of the Japanese territory is mountainous and uninhabitable. In fact, you have 127 million in an area the size of Kentucky (which has about 4 million people).
Greater Tokyo alone has 36 million inhabitants. Land pressures pushed the Japanese to reclaim part of the land from the sea.

As you know, I traveled to Japan, rummaging with my 16 year old son. I got home on Sunday and I’m still working on the jet lag. (There is a 13 hour time difference.) One day, we visited the famous Tsukiji fish market.

This market is the largest seafood market in the world. An astonishing amount of 2,400 tonnes passes through the market every day. I loved walking around this market and seeing all the weird things the fishermen pulled from the ocean. I could show you a lot of photos, but here’s one that captures some of the color:

The treasures of the sea on sale.

The price is bluefin tuna (maguro), and if you get here at 5 a.m. you will be able to attend the auction. We didn’t get up so early. So when we got there, all that was left was the leftovers. 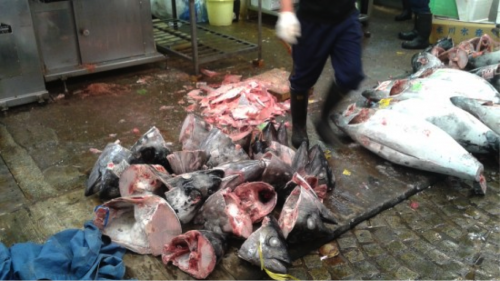 Our work is done here.

But what’s interesting about Tsukiji from a real estate perspective is that it’s built on reclaimed land. In fact, the name means “reclaimed land”. The Japanese reclaimed the land from Tokyo Bay in the 18th century.

Anyway, land prices are high, and the Japanese are not wasting space.

Afterwards, our guide in Tsukiji took us to her home and taught us how to make sushi using ingredients we bought at the market. (Our sushi lunch that followed was delicious.) We saw what a typical Japanese apartment looks like. Here is a photo of the main living room, which offers a great view of Tokyo from the 14th floor. 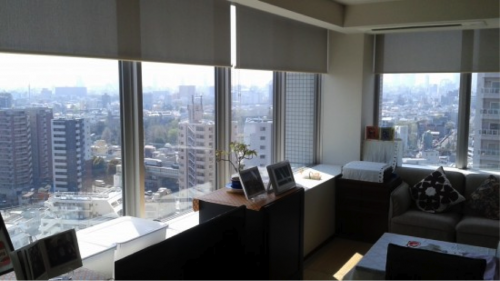 The Japanese make this space work quite well. In the kitchen, for example, everything is compact and tidy. And of course the place was spotless.

We later visited the Tokyo office of a company I oversee called Kennedy Wilson (KW: NYSE), where we met Kevin Thang. He is the chairman of KW’s subsidiary in Japan, KW Investment. It owns a portfolio of 50 apartment buildings. Most of them are in Tokyo.

Thang explained to us how the Japanese real estate market is different from that of the United States. People don’t pay a premium for a sight. There are hardly any amenities such as a gym or swimming pool, especially in Tokyo, as the property values ​​are so high. You basically pay for a room.

KW works through property managers who take care of the day-to-day management of the properties. For its 50 properties, KW works with five property managers. The big difference between Japan and the United States is the delinquency rate. KW is tiny. People pay on time. There is no grace period. If a tenant is one day late, that tenant is delinquent.

Thang explained that in Japan it was common to ask for a guarantor for a lease because there is no credit check system in Japan. The guarantor is the backstop. It could be a family member or even an employer.

Since there are no amenities, an owner’s expense is light. The profit margin is usually 80% of the gross rent. The turnover is 10-20% per year and it is not difficult to keep the buildings full in Tokyo. We have seen a lot of construction in the city, but they are not building apartments.

Right now, especially with the Olympics approaching in 2020, the bulk of construction is on infrastructure and major projects. Construction costs have increased in the face of strong demand.

And developers believe it is no longer worth building an apartment at current rents, which could indicate future rental growth.

Today, an apartment only earns about 4% in Tokyo, but you can borrow at 1%. The margin is therefore still there. KW, too, continues to benefit from rent increases, despite falling or stable prices in much of Japan. (Although that is partly changing. Wages are increasing, Thang said.)

But is Japanese real estate a buy or a sell?

KW bought its last building in Japan in 2008. Prices have been stable most of the time, but have recently taken off. 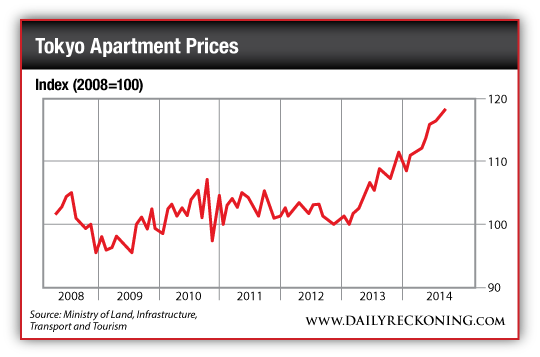 It looks like KW took this as a sell signal.

KW announced that they sold their wallet just days after my visit. (In fact, I later found out that they signed the documents the day I was in the office. Funny timing.)

I’m not an expert on Japanese real estate, but the folks at KW are. In one form or another, they have been on the market since 1995. Not only that, but KW, as you know, have been savvy buyers and sellers of real estate everywhere they have gone. If they sell, I don’t buy.

However, always on the lookout for opportunities, I see that KW still keeps a foothold in the market. Buried in 8-K, I find the following footnote to the case:

“[KW] plans to invest approximately $ 7 million alongside the acquirer to retain approximately 5% of the stakes in the portfolio. In addition, a wholly owned subsidiary of the Company (“KW Manager”) will enter into an asset management agreement with the purchaser to provide asset management services for an initial term of three years. “

Clever. And a way to leave the door open. If an opportunity arises, KW will be there. It is the age-old wisdom of the market at work. What is a sale today could be a buy tomorrow. And vice versa.

Always be prepared to change your perspective. Never let a door close completely.

Chris Mayer
for The daily count

Why buying a house is better than ...